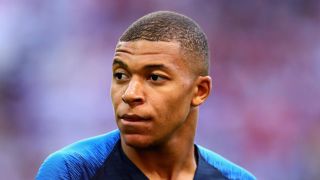 Mbappe, 19, became the first teenager to score more than once in a World Cup match since Pele hit a double in Brazil's final win against Sweden in 1958.

Although he has shone in both Ligue 1 and the Champions League at club level with Monaco and Paris Saint-Germain, Mbappe announced himself on the global stage in Kazan on Saturday.

The striker's brace of well-taken finishes in a 4-3 defeat of Argentina takes him to three World Cup goals as France prepare to face Portugal's conquerors Uruguay in Friday's quarter-final.

And Pele was quick to offer his support as Mbappe confirmed his status as one of the world's most exciting young talents in stunning fashion.

"Two goals in a World Cup so young puts you in great company!

"Good luck for your other games. Except against Brazil!"