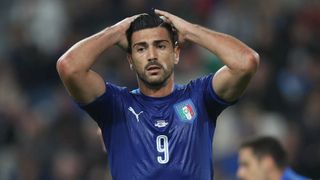 Graziano Pelle was banished from the Italy squad in October after snubbing the handshake of coach Gian Piero Ventura, but the Shandong Luneng striker remains hopeful of a recall.

Former Southampton forward Pelle ignored Ventura after being replaced by Ciro Immobile during the second half of Italy's 1-1 draw with Spain in World Cup qualifying.

The 31-year-old has not featured since and the fact he now plays his domestic football in China could further hamper his chances of finding a way back in.

"Italians are very proud people, they like to select players that are in the major leagues," Pelle told Chinese news network CGTN.

"I had my chance with the national team and it was amazing. If I will be needed, I will always be open to it.

"Right now it isn't the right moment to say if I will be back, but we will see.

"The important time [of my career] was the Premier League, it was the best competition at that moment, and maybe it still is. After that I knew that if I could do well, there’s a chance to reach the national team."

Discussing his experience in China so far, Pelle added: "It’s a big change, in every way. Football, coach, language, a lot of things, but I like to think positively.

"I like to open my mind to different people and actually the club has been very helpful. They will help me when I need them.

"I'm always thankful for joining this club, it was an important moment in my life and also my career.

"After Euro 2016, I had many offers, but I thought this would be the best decision and I’m very happy to come here."