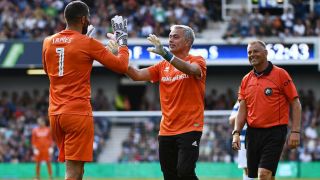 Jose Mourinho ended up on the losing side after going in goal for a charity match to raise funds for the victims of June's Grenfell Tower fire.

Manchester United manager Mourinho came on as a second-half substitute for Alan Shearer's side in Saturday's friendly at a packed Loftus Road, donning the gloves for a penalty shoot-out and scoring his own kick from 12 yards.

But Les Ferdinand's team came out on top, pop star Olly Murs scoring the winning penalty past Mourinho to clinch victory after a 2-2 draw in which Olympic hero Mo Farah had opened the scoring.

Mourinho was also the butt of a joke from Shearer, the former Newcastle United star joking that although United legend Alex Ferguson could not make it to the game, "the second-best thing" was on show in the form of Mourinho.

"I just told them I would play in goal because I wouldn't have to run so much!" Mourinho - who lives close to Grenfell - told Sky Sports after the match.

"We have to bring some fun, something different to these matches. Matches where, in this case, you are honouring the memories of many. And trying to give happiness to the ones who stayed."

hits the winning penalty for past José Mourinho! September 2, 2017

Grenfell residents and firefighters who battled the blaze were among those to play in the game, along with former footballers such as Trevor Sinclair, David Seaman, Jamie Redknapp and David James.

Celebrities like Wretch 32, Jamie Dornan, Damian Lewis, Ed Westwick and James Bay also took part in front of a capacity crowd at the home of Championship side Queens Park Rangers.