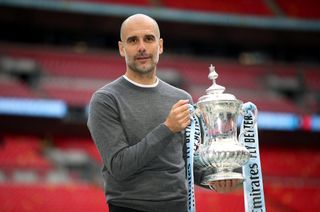 Pep Guardiola knows his Manchester City side’s domination of English football will count for nothing unless they win the Champions League.

City completed an unprecedented domestic treble on Saturday when they won the FA Cup with a 6-0 demolition of Watford at Wembley, adding to the Premier League and Carabao Cup they had already won.

It proved a fitting send-off for captain Vincent Kompany, who on Sunday announced he is leaving the club to become Belgian side Anderlecht’s player-manager.

Guardiola has turned City into one of the best ever English sides and they look set to dominate on home soil for some time, but their lack of success in Europe remains a black mark against them.

They were knocked out of the Champions League at the quarter-final stage by Tottenham – a team they finished 27 points ahead of in the league – and have never gone past the semi-finals.

Guardiola says this current crop has to start achieving success in Europe.

“I said before that I know we will be judged at the end on whether we win the Champions League,” he accepted.

“I know unless we do that it will not be enough.

“This comes with me. I know that. I arrive in Barcelona, we were lucky we won it two times in four years and the people expect I am something special that we have to win the Champions League and it’s still true.

“In this club, the points record and the domestic competitions is incredible, but the Champions League we don’t win quite often compared to the other ones because the teams are so good, the competition is so demanding but we want to win it.”

Worryingly for the rest of the Premier League’s top six, Guardiola is determined to improve the City side, though warned not to expect a repeat of the “once in a lifetime” treble.

“I wouldn’t be here next season unless I believed we could improve as a group,” he said.

“I know it will be difficult because people will compare and people cannot expect us to repeat the treble or four titles in one season, that is something one team does once in their lifetime.

“I’m not focused, believe me, at the start of the season thinking, ‘I have to win one title, two, three or four’, never.

“(I want to) Continue to try to play good and to arrive at the last stages of competitions, fighting, you know the players follow us to do that.

“That is what I want, that is my target for the next season, to keep this spirit, this group follow our people.”