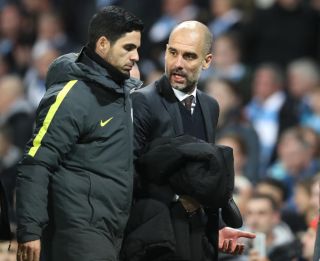 Pep Guardiola admits Mikel Arteta has a key advantage as he prepares his Arsenal side to face Manchester City.

Guardiola’s former assistant returns to the Etihad Stadium for the first time since leaving City in December in a rearranged Premier League clash on Wednesday.

Arteta spent more than three years working under Guardiola, playing a big role in the winning of five major trophies, before opting to take the top job at the Emirates Stadium.

Guardiola is renowned for his meticulous attention to detail and thorough analysis of opponents, but he concedes Arteta has the upper hand on this occasion.

He said: “He has more information about us than I have about the Arsenal team but that’s normal.

“It was a huge amount of hours working together, on thoughts and ideas, solving problems, before the game and during and after the game, especially identifying the quality of the players.

“He knows exactly the way we love this game and the quality of the players. I can imagine a little bit what he thinks but I’ve not been in his locker room since he’s been manager and I don’t know his players.”

Guardiola was keen for Arteta to stay but admits he could not stand in his way.

💬 "Obviously now I am in a different position, another bench and I will defend my club as well as I can."— Arsenal (@Arsenal) March 10, 2020

He said: “It’s happened in the past with my colleagues and my assistants. I never said what they have to do. They have ambition, professional ways, families and everything.

“He loves Arsenal, he was there many years. It was a dream from day one to go back there. This challenge came and he had to take it.

Wednesday’s match goes ahead as normal but the likelihood games may have to be played behind closed doors due to the coronavirus crisis is increasing.

Guardiola is not keen and would rather see the league programme halted than play without fans.

He said: “If it’s a short time, one game, then OK, but if it’s longer it must be suspended. There is no reason to play without the people. This is for the people.

“It’s like an actor going to the theatre when nobody is there. Who are you acting for that night? It’s for the people.

“We’ll see what happens over the next few weeks. Maybe attendances going down solves the problem. Then, OK, continue with the games.

“Now Barcelona-Napoli is behind closed doors, I think Bayern Munich-Chelsea too. I think it’ll happen soon here. If it happens for four, five, six games it makes no sense.”