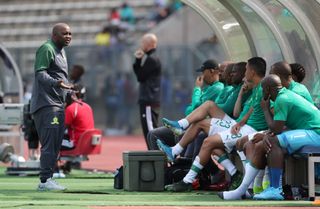 Mamelodi Sundowns coach Pitso Mosimane has selected six players he believes are in the running for the Footballer of the Season award.

The 56-year-old has named two Kaizer Chiefs players as candidates for the top award – Samir Nurkovic, who bagged 14 goals and six assists over 31 appearances, and Lebogang Manyama, who made 32 appearances, scored seven goals and assisted a further 10.

Mosimane has also picked four of his own players to claim the big prize. He strongly believes Themba Zwane is the front-runner but also gives Gaston Sirino, Hlompho Kekana and Denis Onyango a chance to get the nod.

‘I’ll start first with my players, Themba Zwane must win it. Why? I mean, he’s been consistent for the whole season,’ Mosimane told the media.

‘Unless it’s an Absa Premiership Footballer of the Season, then I understand and then I’d say he’s got a little bit of competition from [Samir] Nurkovic.

‘But for me, it’s Themba Zwane – he scored a lot of goals, created a lot of chances, made us play; and the difference is Nurkovic plays after seven days while Zwane plays after two days.

‘The stress and fatigue, and the mental stress, when Zwane plays in the Absa Premiership is not the same as for Nurkovic, I just want to show the differences.

‘They might be playing the same number of games in the league but the one just landed on Monday and plays on Wednesday, while the other one played on Sunday and he’s playing again [the next] Sunday.

‘I know it’s not related, but that’s my opinion. But [Nurkovic] has done well, I also think Lebogang Manyama did well, to be honest.

‘[Gaston] Sirino, I’d put him there but he’s sometimes got his things personally, that I say he must clean them, not to be part of that – he can be naughty sometimes and that taints his brilliant performances a little bit, with these red cards and all that.

‘Hlompho Kekana would be there; I’d give Themba and Hlompho the same [rating] because they are consistent in the number of games they play under stress and pressure, and Denis [Onyango] is always there.’