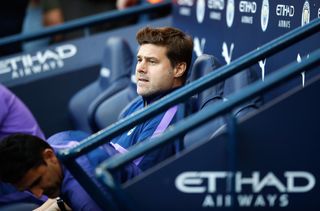 Tottenham boss Mauricio Pochettino is counting down the final few hours of the European transfer window before he can hit the reset button with his squad.

Pochettino has been managing a difficult situation at Spurs as a number of his group have been unsettled while the prospect of a move to Europe was still a possibility.

The Premier League season is well under way, but the future of Christian Eriksen, Toby Alderweireld, Jan Vertonghen, Danny Rose, Victor Wanyama and Serge Aurier has been in doubt.

But the window closes at 5pm on Monday and Pochettino, who is not expecting any departures, is looking forward to be able to work with a settled squad.

“I was a little bit worried about the situation, because we knew very well what was going on,” he said.

“I am optimistic, happy, what is most important is to all be on the same page, with the club.

“That players have a clear idea where we want to arrive and how we want to move, clear minds like today Christian and different players, tomorrow they’re only going to be focused on Tottenham, not on thinking about different things that make management so difficult.”

Eriksen’s situation has been the most unsettled after he spoke about a desire for a fresh challenge, but the move to a top European club he wished for has not materialised.

He played 90 minutes in Sunday’s 2-2 draw with Arsenal and outlined his importance to the club with his 50th Premier League goal.

Pochettino says, barring any late twists in the tale, the Dane will be a Spurs player on Tuesday.

“I think nothing is impossible in football, but the most important thing is that it is only 24 hours and I hope that everything will be clear for everyone.”

A derby point. Could have been more but take it and move on. Time for @England now. #COYSpic.twitter.com/k8Vq4OFdg0— Harry Kane (@HKane) September 1, 2019

As well as toasting the closing transfer window Spurs could also have been celebrating three points at Arsenal in a thrilling north London derby where they led 2-0.

Eriksen tapped in from close range and then Harry Kane’s penalty – his 10th goal in 10 games against Arsenal – doubled the lead.

But the Gunners crucially got one back on the stroke of half-time through Alexandre Lacazette and then Pierre Emerick-Aubameyang’s equaliser earned a point.

The point was the least Arsenal deserved as they were camped in Tottenham’s half after the break and boss Unai Emery felt his side could have won.

“Obviously after 2-0 we can be very proud of our response and how our supporters pushed us to get the second goal,” he said.

“The result I think we deserved more, we controlled the second half better than the first half.

“After the first 20, 25 minutes it was very good at the beginning. That second goal gave us difficult moments but the players worked very well to recover the result for us and our fans.

“We created a very good atmosphere. The game was amazing for the football but for us it’s not enough.”