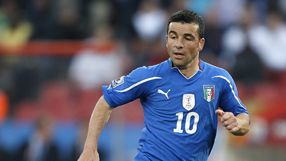 The 34-year-old, Serie A top scorer last term and in form again this season, thought his Italy career was over after not featuring since a poor 2010 World Cup but long-term injuries to Giuseppe Rossi and Antonio Cassano have opened the door.

"I will call up Toto (Di Natale) against the USA," Prandelli told Tuesday's Gazzetta dello Sport, adding that Napoli goalkeeper Morgan De Sanctis was also fresh in his thoughts.

Di Natale has scored 10 goals in 36 appearances for Italy, who are in Euro 2012 Group C with Spain, Ireland and Croatia.