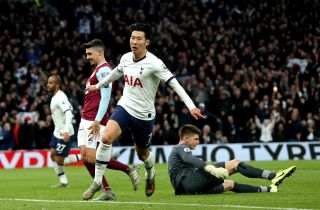 The Premier League produced some stunning goals before being suspended because of the coronavirus outbreak.

Here, Press Association Sport picks six of the best from the 2019/20 campaign.

Southampton striker Djenepo stunned Bramall Lane with a beauty. The Mali international picked up a loose ball 40 yards out and beat three defenders before drilling a low shot into the bottom corner past Blades goalkeeper Dean Henderson. It was a goal worthy of winning any game, and so it proved as Southampton triumphed 1-0.

Sadio Mane had already scored two terrific goals to wipe out Newcastle’s early lead through a Jetro Willems thunderbolt when Salah took centre stage. The Egyptian played a one-two with Roberto Firmino – the Brazilian sending the ball back into his path with a brilliant back-heel flick – and raced into the area to beat Martin Dubravka with an ice-cool finish.

Rarely has a ball been hit harder than De Bruyne’s strike at St James’ Park. Benjamin Mendy’s cross was headed out by Newcastle defender Paul Dummett toward De Bruyne just outside the box, and the Belgian chested the ball down before lashing a thunderous right-footed volley off the underside of the crossbar.

Chelsea were heading for three points on the south coast when Iran international Alireza Jahanbakhsh produced a bolt from the blue. Lewis Dunk got his head on Leandro Trossard’s corner, but there seemed no danger until Jahanbakhsh produced an outrageous bicycle kick which left Chelsea goalkeeper Kepa Arrizabalaga helpless.

Timing is everything in life and Ayew sent Selhurst Park into raptures with an incredible last-minute winner. Ayew appeared as if he was on a harmless run across the face of the penalty area until he spun and danced past three defenders before calmly chipping the ball over Hammers goalkeeper Roberto.