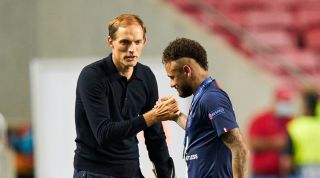 Paris Saint-Germain are set to react to their 2020 Champions League final loss in a way that only they possibly can, according to reports - by targeting Luis Suarez and Lionel Messi from Barcelona.

Ligue 1 may have already begun again but PSG are not going to rest on their laurels. The club are hoping to recruit the unsettled Messi and Suarez from Barca, in order to reunite the famed MSN trio.

Suarez is expected to depart Camp Nou after six years in Catalonia. The arrival of Ronald Koeman is set to shake up the club, with the Uruguayan striker apparently turning down the option of returning to former side Ajax. Koeman is set to cull the likes of Arturo Vidal and Ivan Rakitic too, but apparently his phone call to 33-year-old Suarez - who's the second-highest top scorer in Barca's history - lasted just 60 seconds.

Meanwhile, Tuchel has stated that Leo Messi - whose contract saga is ongoing - would be "very welcome" in the French capital.

Last season saw a big shake-up at the Parc Des Princes, following a shock Champions League exit to Manchester United and Tuchel failing to lift any domestic cups in France. PSG spent relatively frugally - at least by their standards - bringing in the likes of Idrissa Gueye from Everton, Ander Herrera on a free transfer from  United and Mauro Icardi on loan from Inter Milan, among others.

While PSG have Financial Fair Play laws to juggle as a club, this summer may present an opportunity for Les Parisiens to spend a little more freely, since the laws have been relaxed in the midst of COVID-19.

Thiago Silva is set to leave the club after confirming that the game against Bayern Munich would be his last in the blue of PSG. The club are reportedly interested in Liverpool centre-back Joel Matip - who offers experience of having won a European title - but Jurgen Klopp isn't likely to want to lose another defender after selling Dejan Lovren to Zenit Saint Petersburg earlier on in the window.

Tuchel retains an interest in Arsenal's Matteo Guendouzi, with the Gunners looking for a chance to cash in on their want-away youngster, while Hector Bellerin has reportedly been offered to the French champions amidst interest from Juventus - though the Spaniard would prefer a move to Italy or back home to Barcelona. Paris Saint-Germain are also apparently interested in a shock move for Crystal Palace's Wilfried Zaha.

Another superstar name linked with the club in recent weeks has been Cristiano Ronaldo - though there's nothing concrete as yet.

Ronaldo is apparently unhappy at Juve. While PSG have a wealth of attacking options, signing the Portuguese legend would be a huge coup for the club, not to mention the marketing possibilities of the side, who have their kits manufactured by Nike.

Neymar has been rumoured to leave France for over a year now. Though the rumours have been subdued lately, the opportunity to replace the Brazilian with Cristiano Ronaldo would be spectacular, if not a little short-term. Should CR7 join Neymar, however, a front three of the duo alongside Kylian Mbappe could well become the most exciting in Europe.

With Icardi in the squad too, Thomas Tuchel would be spoilt for options. Right now though, it does feel more like fantasy speculation.