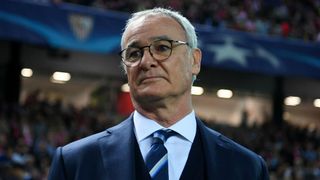 Claudio Ranieri insists he has had no contact with Watford over replacing outgoing boss Walter Mazzarri and says he would not reveal such information even if he had.

The Hornets are on the hunt for a new manager after it was confirmed Mazzarri will leave his post just one season into a three-year contract following their final Premier League match against Manchester City.

Ranieri led Leicester City to a stunning Premier League title success last term before being dismissed in February with the Foxes having endured a miserable defence.

The veteran boss has been heavily linked as the man to replace fellow Italian Mazzarri at Vicarage Road, but for now he has not been sounded out over the position.

"No [I have not spoken to Watford], but if I had, I wouldn't tell you," Ranieri told Sky Sports' 'Goals on Sunday' programme.

"I'm very surprised because Mazzarri is an Italian manager. The owners are Italian, I don't understand what happened but that's football."

Ranieri added that his next job will not necessarily be in England.

"After winning the title with Leicester I have to do very well to choose the right next job," he said.

"I am a European manager and I have an agent in Spain, in France, in Italy and England so now I want to choose very well.

"For me the right project is important. Say everything clear and then it is important for me to link these things and then I go 100 per cent.

"We have to be together in everything. If I agree I give 100 per cent of myself."