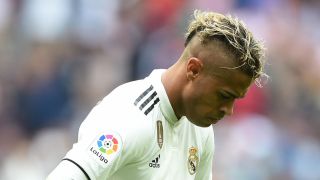 Mariano Diaz's bad luck with injuries has continued, with Real Madrid confirming he is set for another spell out with a back problem.

The forward returned to Madrid in August after a year away at Lyon, essentially coming in as the only replacement for Cristiano Ronaldo, who joined Juventus.

Mariano has featured just five times in LaLiga this term, with only one of those outings coming from the start, and his solitary goal came in the Champions League.

Injuries have disrupted his season, with two hamstring issues ruling him out of the first couple of weeks in November and then most of December.

The 25-year-old was expected to be back in contention after Madrid's winter break, but the club announced on Monday that he is suffering with "an irritation of the sciatic nerve" in his back.

Madrid have not said how long they expect Mariano to be out for, though he is unlikely to be ready for Thursday's trip to Villarreal.