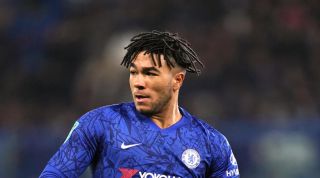 Reece James insists he has a long way to go before replicating David Beckham's achievements in the game.

The Chelsea right-back has earned comparisons with the former England and Manchester United star for his crossing ability.

And James, who signed a new five-year contract with the Blues on Thursday, says he is flattered by the comparisons.

"David Beckham is a legend and probably one of the best crossers of the ball there has been in world football," he told Chelsea's official website.

"To be mentioned in the same sentence as his crossing is very good for me but he did it for many years and I have to respect what he did.

"I have only done it for a few games. A lot of people have said about it but I need to maintain it and keep on improving.

"If there is a free-kick there and it is for me, I would not put it past me. It is similar skill, not too much difference."

An ankle injury disrupted James' start to the season, with the youngster only making his first appearance in September.

James has now racked up 18 outings in all competitions and was delighted to commit his future to Chelsea.

"Being injured at the start of the season was tough and then I slowly got back into it and I was given my chance against Grimsby, scoring on my debut was great, and ever since then I haven’t really looked back," he added.

"We started talking about a new contract about two months ago. When I started getting in the team and playing week in week out, everything has picked up.

"I have been here nearly my whole life and I would be happy to spend the rest of my career here. It is the club I have supported throughout and I have committed long-term.