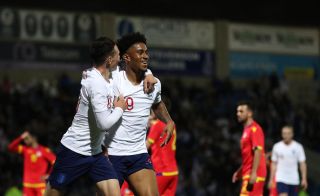 Reiss Nelson’s German mission is coming to an end and the Arsenal youngster feels he has grown up.

The England Under-21 international is heading into the final few weeks of his loan spell at Bundesliga side Hoffenheim.

A stellar start, injuries and struggles with the language have sent the Gunners forward on a steep learning curve.

He was even dropped from the squad for the 2-1 win over Nurnberg earlier this month which boss Julian Nagelsmann described as an “educational measure”.

“I was late to training, I was 20 minutes late, and that’s something I need to learn from,” he told Press Association Sport ahead of England Under-21s’ friendly with Germany in Bournemouth on Tuesday.

“You can make mistakes but it’s your job and you shouldn’t be late.

“I held my hand up and I said sorry to him and we both moved on as bigger men. He put me in the squad the next week because I’d been doing well.

“I’ve been out there for 10 months by myself. It’s not been easy and I haven’t had my mum or my brother about. I’ve got to do my own shopping, I haven’t got many friends out there but it’s my job and I’m there to play football.

“When I do come back I do like to go out with my friends and see family because in Germany I’m on a mission. I do like to enjoy myself when I’m back but that’s normal for a guy my age.

“I don’t get homesick but my family are very good, they’ll fly straight over and my brother will come and stay for a month and my mum will come over any time I ask her.”

He scored twice in his first two games – an impudent backheel helping the under-21s to a 6-0 win over Andorra to wrap up Euro 2019 qualification before netting in a 2-0 victory in Scotland.

But since then form and fitness – Nelson suffered a back injury in January – has seen the forward struggle to make an impact and the young Gunner is yet to start in 2019 for Hoffenheim, who are ninth in the Bundesliga.

He is in regular touch with Jadon Sancho but while Sancho – who started in England’s 5-0 win over the Czech Republic on Friday – has become a star at Borussia Dortmund, Nelson is pragmatic with his own development.

Delighted to win @Bundesliga_EN rookie of the month! Big thanks to all the supporters who voted 💙 @TSGHoffenheimpic.twitter.com/P0wwpFk5MD— Reiss Nelson (@ReissNelson9) November 30, 2018

“Football is like that, you dip in form – especially at my age – but the main thing is you keep your focus,” he said, having played 24 times this term.

“You know what your targets are. Mine were just to play for Hoffenheim and do well when I get the chance.

“I always try to be positive but not expect too much of myself, just have a nice balance. After injury I was a bit sluggish in training, but with the help from the guys at Hoffenheim, they spoke to me well and nurtured me back in slowly.”

Tuesday’s game with Germany is the final friendly before Euro 2019, where England play France, Romania and Croatia in Group C.

Nelson set up Dominic Calvert-Lewin in the 1-1 draw with Poland in Bristol on Thursday.

And as he sits in reception in the team hotel it is clear being back with the Young Lions is more than just a duty, even if it takes him away from his homework.

“I’ve missed them because it’s nice to hear the English language, the boys at the club obviously usually speak German to me,” said Nelson, who played 16 times in his debut season for Arsenal last year.

“My German is OK, I’m saying a few bits. It’s not where I expected it to be though. At the start of the season I said to myself I would like to learn German and by the end I’d be able to speak it properly.

Strong selfie game, that 🤳@ReissNelson9 and the Hoffe squad have spent the evening with our supporters at this year's #FanNight!#TSGpic.twitter.com/mS1PczmMQR— TSG Hoffenheim EN (@achtzehn99_en) February 26, 2019

“But it does get hard when you have to study by yourself. You get distracted.

“I do lessons with a couple of the guys but they are older and they can’t really be bothered so I’m just learning by myself. I understand enough though.

“My mum said it would be good (to carry it on) as I already know the basics, rather than learning a new language from the start.”

But it is success, rather than studying, which is Nelson’s focus now.

“It’s about getting in (the Euro 2019 squad) and doing well for the team. You need to be doing that, show it in training and in the friendly games we have,” he said, with manager Aidy Boothroyd needing to name the squad by June 6.

“You can plant the seed in Aidy’s head you’re there to be picked for the Euros.”