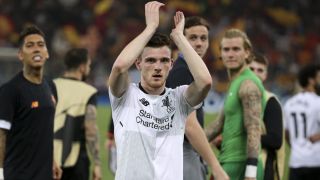 The Scotland international arrived at Anfield for a reported £8million last year, leaving Hull City after the club were relegated from the Premier League.

Robertson, 24, was stunned to be into a Champions League decider against Real Madrid after Jurgen Klopp's men edged Roma 7-6 on aggregate in their semi-final despite a 4-2 loss on Wednesday.

"At times when you're playing at Queen's Park, Dundee United even Hull, you don't ever think you're going to play in a Champions League final," he said.

"Bit when you come to a club like this, they've won it five times, they've competed in it a lot of times, you come here to try and win trophies and that's what we'll try and do.

"This season it's the Champions League and we're one step closer."

Liverpool were pushed at the Stadio Olimpico after a late Radja Nainggolan brace, but they managed to hold on.

Robertson spoke of the relief after the Premier League giants reached an eighth final in the competition and first since 2007.

"It's just relief really," he said.

"Hearing the final whistle and you go, 'bloody hell, we're in the Champions League final' and I think a few of the lads maybe took a wee bit of time [to let it sink in] and there was a few on the floor, a few hugging and it's just adrenaline gets you through.

"It was just an unbelievable feeling and a feeling when the draw got made we wanted at the end of two ties."