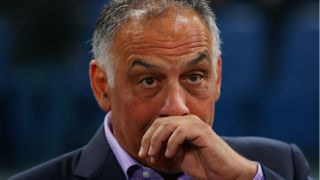 Roma president James Pallotta says he is "dying of laughter" after being charged with improper conduct by UEFA.

Pallotta labelled the officiating in his side's Champions League semi-final defeat to Liverpool "an absolute joke", prompting the European governing body to begin action against him on Friday.

The American, though, has offered a dismissive response, while praising his club and local authorities for ensuring the second leg passed without incident in the Italian capital this week.

"I'm surprised by the opening of this disciplinary procedure," he told ANSA.

"For me, UEFA's conduct is inappropriate. What do I think? I'm dying of laughter.

"The authorities, CONI [the Italian National Olympic Committee] and Roma guaranteed professionalism that I've never seen in any sporting event before.

"We couldn't be any more proud of our fans and the city."

Roma claimed a late 4-2 win over Jurgen Klopp's men at the Stadio Olimpico on Wednesday but went out 7-6 on aggregate.

Emotions and occasions that will never be forgotten...GRAZIE ROMA! May 2, 2018

Radja Nainggolan completed the scoring with a stoppage-time penalty but Pallotta felt the hosts should have been awarded two earlier spot-kicks for challenges on Edin Dzeko and Patrik Schick.

"It's absolutely clear that VAR [video assistant referees] is needed in the Champions League, because you can't let stuff like this go," he told reporters.

"I know it's difficult to ref, but it's really embarrassing when we lose on aggregate like that… By the way, it should've been a red card, so would've been 10 men from the 63rd minute.

"Again, congratulations to Liverpool, they're a great team, but if we don't get VAR in the Champions League, stuff like this is an absolute joke."

In a charge sheet that also reprimanded both clubs for supporters using fireworks, UEFA stated Pallotta would face charges of improper conduct in breach of two articles of the competition rules.

Roma will also answer UEFA charges in relation to "blocked stairways" and "insufficient organisation", with the governing body's Control, Ethics and Disciplinary Body to hear the case on May 31.

Pallotta does have an ally in Juventus head coach Massimiliano Allegri when it comes to the use of VAR in the Champions League.

Speaking at a news conference ahead of Juve's Serie A match against Bologna on Saturday, Allegri stated using technology to support officials in Italy's top flight had proved a success.

"Speaking about the Champions League we have to compliment Roma for how they played," he said.

"I think VAR helps a lot if it's used correctly. In Italy after a while of getting used to it, it's working in the right way."