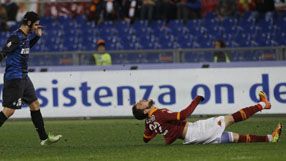 The 22-year-old suffered strains to his right ankle and left knee during Roma's 2-1 win over Inter Milan in the first leg of the Italian Cup semi-final on Wednesday, but tests by club doctors revealed more significant damage to his knee.

"The player underwent two rounds of tests which identified a tear to the lateral meniscus in his [left] knee. He will therefore require an operation," Roma said on their website on Friday.

Destro has had a hard first season in the Italian capital after joining from Siena, scoring only four goals in 16 appearances.

Roma, who are eighth in Serie A on 33 points, take on Bologna on Sunday.