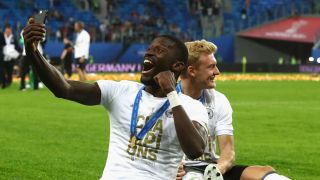 Antonio Rudiger was in no mood to discuss his club future after helping Germany battle to a 1-0 Confederations Cup final win over Chile.

Rudiger's defensive physicality was vital in St Petersburg as the world champions started and finished the contest under sustained pressure from the Copa America holders.

Roma centre-back Rudiger has been heavily linked with a move to Premier League champions Chelsea, while Manchester City have emerged as another possible destination for the 24-year-old, according to the latest round of speculation.

Nevertheless, the player himself only had eyes for Germany's celebrations and pledged to clarify club matters over "the coming weeks".

"It's not about the future now, it's now about enjoyment," he said.

"I need to enjoy this moment and I'm enjoying it to the fullest.

"The rest we will see in the coming weeks."

Joachim Low's youthful side, lacking a number of rested first-choice stars, have played with pleasing attacking verve throughout their time in Russia.

Those qualities were in evidence again during the middle section of the final but they also had to show a steel not required up until this point at Krestovsky Stadium.

"It was not easy. The guys had to work really hard," Rudiger added.

"We played as a team in all games and I think that was the key."