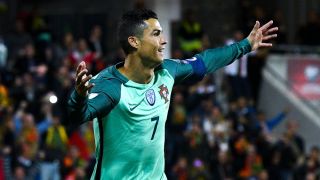 Cristiano Ronaldo had not been able to train fully ahead of Portugal's crunch World Cup qualifier in Andorra, explained Fernando Santos after the forward came off the bench to inspire a 2-0 win.

Ronaldo, one booking away from being suspended for the concluding Group B game at home to leaders Switzerland on Tuesday, was surprisingly named among the substitutes for Saturday's qualifier.

But after a goalless first half in which the Euro 2016 champions toiled in the absence of their captain and record goalscorer, Santos turned to the 32-year-old at the interval and he proved the difference.

Ronaldo tucked home his 15th goal of the qualifying campaign from close range to open the scoring, then provided a cross from which Andre Silva added a late second to wrap up the points.

Portugal will host Switzerland in Lisbon in a shoot-out for Group B's sole automatic qualification spot, but Santos said Ronaldo's suspension situation was not the only reason for his absence.

"I thought a lot. I thought, well, Ronaldo did not train 100 per cent in two of the days of work," Santos told RTP.

"There were many factors that led to this decision. Games are complicated, I tried to manage and do what was best.

"Whether it was questionable or not... we ended up winning and that's what matters."

Andorra goalkeeper Josep Gomes was mostly untested before Ronaldo broke the deadlock in the 63rd minute, with Santos blaming Andorra's synthetic pitch for his side's struggles.

"We knew it was going to be difficult and it was notable the team had difficulties adapting to the pitch, and then with their defence very close, [we were] lacking momentum," Santos said.

"I had to put Ronaldo on the field, another forward and everything improved. There was a period of adaptation, but from a certain moment we created situations. We ended up winning as well, as we wanted.

"We also had the goal of not taking cards and ending up without injuries. In the first half, we lacked momentum. They wanted it, but it was not easy because the ball was difficult to control."