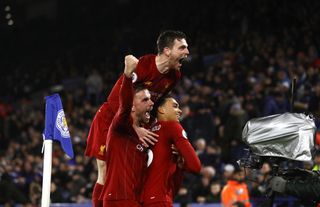 Outstanding Liverpool stretched their lead at the top of the Premier League to a seemingly uncatchable 13 points with a 4-0 thrashing of nearest challengers Leicester.

Fresh from their Club World Cup victory in Qatar last weekend, Jurgen Klopp’s side continued their march towards the league title in devastating fashion.

Following a spectacular light, sound and pyrotechnics show for 15 minutes at the King Power Stadium ahead of kick-off, it was a question of whether the football that followed would be equally as dazzling.

From Liverpool’s perspective, the answer was a resounding yes. They displayed no signs of tiredness from their exertions in the Middle East as for the majority of the game they made second-placed Leicester look second rate.

Klopp’s side could easily have scored in the opening minute, but Kasper Schmeichel was initially equal to a swerving 20-yard effort from Alexander Arnold after 37 seconds and then, 23 seconds later, Sadio Mane inexplicably skewed wide from three yards a piercing left-wing ball from Mohamed Salah.

Leicester’s nervousness in defence was evident in the fifth minute when Jonny Evans gave the ball away just outside his own area to Georginio Wijnaldum who, along with Firmino, teed up Salah, but the Egyptian could only spoon his effort over the crossbar from 18 yards.

A counter-attack from a Leicester corner resulted in Naby Keita sending Salah clear but, despite rounding Schmeichel, who had been forced to race outside his area, the angle proved too acute for the Egyptian, who could only find the side-netting.

The danger appeared negligible when a cleared corner fell to Alexander-Arnold 20 yards outside the area, yet his whipped-in right-footed delivery to the edge of the six-yard box was inch perfect, giving Firmino the simplest of headed finishes.

The lead could have been doubled three minutes later when Virgil Van Dijk teed up Mane to wriggle his way into a shooting position from 12 yards, but Schmeichel kept his side in the match with a brave chest block.

After failing to record a single shot in the first half – either on or off target – Leicester were remarkably still in the game and, for a spell just after the hour, they managed to apply a degree of pressure of their own.

Yet from the 71st minute their challenge fell apart, sparked by Caglar Soyuncu’s handball from Alexander-Arnold’s inswinging corner.

Just a minute after coming on as a substitute for the exceptional Keita, and with his first touch of the game, Milner comfortably beat Schmeichel from the spot.

Three minutes later Firmino had his fourth goal in three games, starting and finishing a move that also involved Milner and Alexander-Arnold, who was the provider again with another piercing low delivery.

And it was then Alexander-Arnold himself who rubbed salt into Leicester’s gaping wounds in the 78th minute with a first-time strike from the edge of the area following Mane’s through-ball as the Reds took another major step towards the title.