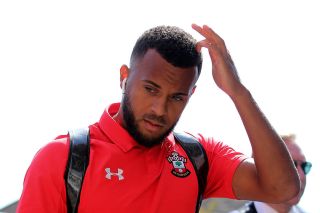 Ryan Bertrand became the first Premier League player to receive a red card after a VAR review as Southampton fell behind early in their match against Leicester.

The visitors had just taken a 10th-minute lead at St Mary’s through Ben Chilwell when the restart was delayed for the technology to run a check.

Rather than ruling on the goal itself, though, the official in Stockley Park was casting his eye over an incident in the build-up.

Bertrand, attempting to recover after miscontrolling the ball on a rain-lashed surface, stretched over the top of the ball and his studs made contact with Leicester forward Ayoze Perez’s shin.

Referee Andre Marriner produced a red card with 12 minutes now on the clock, after which a replay of the challenge was shown on the big screen at St Mary’s.

Youri Tielemans quickly made it 2-0 and Perez himself scored twice before Jamie Vardy made it 5-0 at half-time.

The Bertrand incident came just days after a meeting between the Premier League and the International Football Association Board (IFAB) on the implementation of VAR, after widespread criticism this season over the high standard required for a “subjective” decision to be overturned.