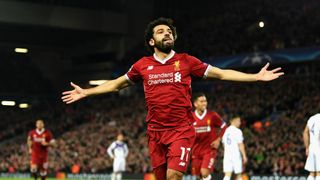 Mohamed Salah has been named African Footballer of the Year for 2017 at the CAF Awards.

Mane finished as runner-up, with Aubameyang in third.

"I have always wanted to be here," Salah told reporters at a news conference before the ceremony.

"I put myself under pressure and take risks. Right now I have the ambition to be the best Egyptian player in history."

Salah enjoyed a stunning 12 months at club an international level, with his form earning a £36.9million move to Liverpool from Roma, having finished the 2016-17 campaign with 15 goals in 31 Serie A games.

The 25-year-old has since become more prolific in his second stab at the Premier League, with a stunning 17 goals in 21 top-flight appearances under Jurgen Klopp for the ex-Chelsea man and six more in the Champions League.

Having helped Egypt to the final of the Africa Cup of Nations, where they were beaten 2-1 by Cameroon, his brace against Congo – including a dramatic last-gasp penalty – secured a first World Cup finals berth for the Pharaohs since 1990.

Egypt boss Hector Cuper collected Coach of the Year and his side won National Team of the Year.

Mane will also feature at Russia 2018 for Senegal and has eight goals for Liverpool despite a stop-start season.  He netted 13 last time around and has often combined thrillingly with Salah.

Aubameyang was unable to inspire AFCON glory for Gabon on home soil, but has remained prolific for Dortmund, finishing 2016-17 as the top scorer in the Bundesliga with 31.

Despite Dortmund's mixed form during the current campaign, he has 21 goals in 23 games across all competitions.