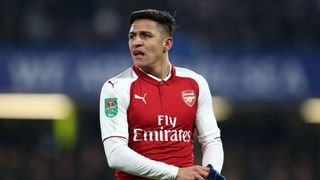 Arsene Wenger insists Alexis Sanchez was not left on the bench for Arsenal's EFL Cup semi-final against Chelsea due to links with Manchester City and hopes the Chile forward stays at Emirates Stadium for a long time to come.

Sanchez was named on the bench for Wednesday's goalless first leg, featuring as a second-half substitute at Stamford Bridge.

The 29-year-old has been heavily touted for a switch to City, who failed to conclude a deadline day swoop for the star back in August.

The Guardian reported on Tuesday that the Premier League leaders had lodged an offer of £20million in a bid to bolster Pep Guardiola's squad this month, with Sanchez out of contract at the end of this season.

Nevertheless, Wenger remained defiant over the prospect of his star attacker leaving and has no doubts over his commitment to the cause.

"No, the team selection had nothing to do with the transfer market," he told a post-match news conference.

"I have not to justify every decision I make, you know. I made over 1000 games and over 1000 teams and I got it every time wrong, but I have to make a decision."

Asked whether he expected Sanchez to remain at Arsenal, Wenger replied: "Yes, that is what I want, I want him to stay for longer because I believe he is a very important player for us and I believe that when he came on tonight you could see that he created danger straight away.

"You have to accept as well when you play so many games, and Sanchez plays every game, that sometimes a breather in the middle of the season helps them a little bit.

"He can make a difference between what's going on outside and what's happening. We live with facts, not with psychological theories and the fact is when you turn out on the pitch you play football and you give 100 per cent. That's what he does."

Wenger expressed regret over letting the issue of his own contract status at Emirates Stadium linger over last season's campaign but he would have no issue if Sanchez does not sign a fresh deal this month and remains in the English capital.

"Look, I have no problem if he signs now or in June," he added. "What is important for me is the next game and that you can rely on him.

"The only thing I want to say is the performance of Alexis and the commitment does not depend on the duration of his contract, it just depends on the fact that when he's on the pitch he wants to play."

Wenger also stood by his decision to retain Alex Iwobi in the starting line-up despite footage emerging that appeared to show the midfielder out partying within 48 hours of Sunday's FA Cup loss at Nottingham Forest.

"If I think he can help the team to win, then that is nothing to do with the fact he can be punished separately, individually."