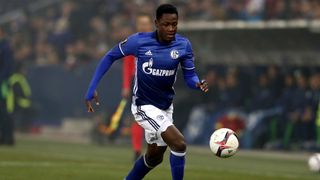 Schalke sporting director Christian Heidel has confirmed the club are in talks to sign Baba Rahman from Chelsea.

The full-back has not made an appearance for Antonio Conte's side this season and has been tipped for a return to the Bundesliga, having spent part of last season on loan in Gelsenkirchen.

Rahman was in talks over a return in August, but the serious knee injury that brought an end to his campaign last January meant Schalke did not pursue that option.

"We're in talks with Chelsea regarding Baba Rahman," Heidel told a news conference.

"There are still one or two things to clear up on their end.

"We could agree on a deal with the player himself relatively quickly."

Heidel does not expect any developments on Leon Goretzka's future before their clash with RB Leipzig on Saturday, however.

The Germany international has been offered a contract extension by Schalke but is also a target for Bayern Munich.

"I don't think there will be a decision to announce before the game in Leipzig," Heidel said.