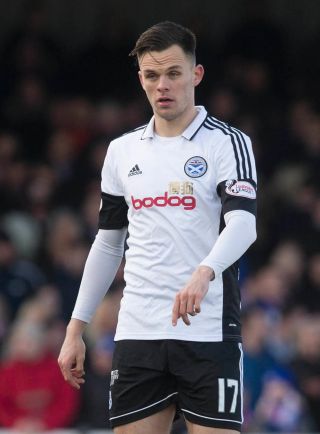 Dundee United striker Lawrence Shankland has been called into the Scotland squad.

The 24-year-old has been selected for next month’s European Championship qualifiers against Russia and San Marino after netting 15 goals in 12 appearances for United following his summer switch from Ayr.

Scotland manager Steve Clarke feels it is a well-deserved call-up for Shankland, who replaces the injured Steven Naismith.

“I know Lawrence quite well from my time here in Scotland having watched him a few times, and it’s not an area that we are over-burdened with top strikers.

“Lawrence is in form and deserves his chance. The best way to look at him and gauge what level he is at is to bring him into the squad. It’s an opportunity to have him in the group, see how he works in the squad and hopefully he can score a few goals for us.

“If you’re in form and a goalscorer, obviously he is going to come into the group with a lot of confidence. He scores goals with his head, left foot, right foot. He’s a natural finisher and that’s something maybe we haven’t had in the squad recently. So hopefully this will address that.”

Fleck has replaced Stuart Armstrong after making five Premier League starts this season and impressing in a 1-0 defeat by Liverpool on Saturday.

Armstrong has dropped out after struggling to get into the Southampton starting line-up.

Burke has been playing on loan for Alaves and he takes the place of West Brom team-mate Matt Phillips, who will get a minor injury treated during the international break.

There is no place for Kieran Tierney after the left-back made his Arsenal debut last week following a lengthy spell out with pelvic trouble.

“I was close to selecting Kieran,” Clarke said. “Arsenal have indicated to us they would prefer us not to select him at this time because he has only played 70 minutes of football.”