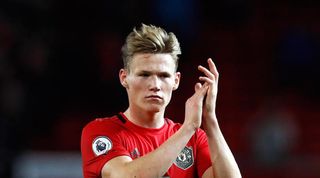 Scott McTominay has the hallmarks of a future Manchester United captain, according to Dimitar Berbatov.

The Scotland international extended his contract at Old Trafford this week, putting pen to paper on a five-year deal.

That is just reward for the midfielder after an excellent season in United's midfield, and Berbatov believes McTominay could one day wear the armband of his former club.

"With his physique and the way he plays football, he looks like a future captain and leader of Manchester United to me," he told Betfair. "Now, the most important thing isn't to relax because he has a new deal, it is the opposite, he needs to play and work even harder.

"He is in the right place to develop, he is surrounded by great players and the coach believes in him. How good he turns out to be only depends on him and how ambitious he is to be one of the best."

McTominay has made 21 Premier League appearances so far this term and has recently been tipped to anchor a new-look midfield containing Paul Pogba and Bruno Fernandes.

And Berbatov believes the Scot's new deal demonstrates how highly the club value him.

"It certainly shows that United have faith in him as a player and the club are making a statement that they are going to depend on him in the future. He's still young and in his early 20s, so for him to see that the club are trusting him and rewarding him with a contract extension is a great day for him to celebrate.

"He definitely deserves a new contract, he has great confidence in the way he moves around the pitch and the way he looks for the ball.

"He is at the stage where he is now comfortable in his position and the way he plays football.

"In the beginning, he needed some game time to get used to everything but now he is fully integrated into the team at such an early age, which is great because he now has more time to play, enjoy his football and make a name for himself as a player."