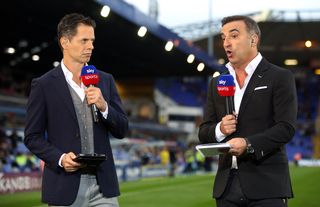 Scott Minto has revealed he has been released by Sky Sports, a day after Matt Le Tissier, Charlie Nicholas and Phil Thompson were also let go by the broadcaster.

Former Chelsea, Charlton and Benfica defender Minto, who had worked as a presenter with Sky for 13 years, said on his Twitter account that his departure was not his own decision.

“It is with a heavy heart that after 13 incredible years with Sky Sports I share the news that I will no longer be working with Sky and be part of their ongoing football coverage,” the 49-year-old Minto wrote.

“While the decision wasn’t mine, I leave Sky with nothing but fond memories of covering the EFL, play-offs, Carabao Cup, Spanish football, Revista De La Liga and many more.

“It has been a truly fantastic experience and a privilege to work with and alongside so many talented individuals.

“I would like to wish the staff and teams at Sky all the very best for the forthcoming season, a season which is set to be truly spectacular both in the Premier League and EFL.

“I am hugely excited by the future and will be sharing news soon of my next project. I look forward to being back on screen very soon.”

A Sky statement on Wednesday said: “We are changing some parts of our football coverage – Matt, Charlie and Phil have done a great job for us over the years, and they will leave us with our sincere thanks and very best wishes.”

The departure of Le Tissier, Nicholas and Thompson was met with a social media backlash that led to former Arsenal striker Ian Wright defending Sky’s decision and also challenging the “racism” he believed was at the heart of that criticism.

“What does Micah Richards, Alex Scott, Sol Campbell, Clinton Morrison or any other black pundit have to do with Sky’s decision to get rid of these guys?” Wright said in a video on Twitter.

“What have these guys done? Because a black person or woman might get the opportunity to do this job. Why are people upset?

“These guys, Matt Le Tissier, Charlie Nicholas, Phil Thompson have had an unbelievable run, it has been a great show. This happens to everyone in the industry.

“This is Sky’s decision to evolve the show and I wish them all the very best.”