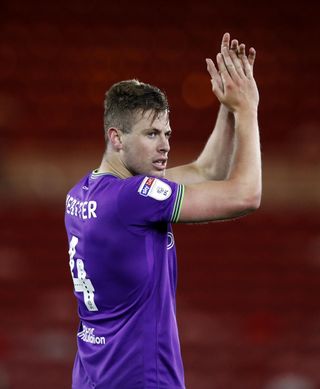 Brighton have strengthened their defence with the signing of Adam Webster from Bristol City as the possible domino effect of Harry Maguire’s move to Manchester United is felt.

The club would not comment on the terms of the deal but reports suggest Brighton have paid what would be a club-record £20million fee for the 24-year-old, who has signed a four-year deal.

Webster’s arrival comes as Lewis Dunk is being widely linked with a move to Leicester as a replacement for Maguire, who is set to move to Old Trafford after United agreed a fee of £80million for the England man on Friday.

Brighton head coach Graham Potter, who faced Webster while managing in the Sky  Bet Championship last season, said: “Adam is a player the club has been aware of for some time, and someone we came up against last season at Swansea City.

“He is a quality defender, comfortable on the ball, fits the profile of the type of player we want to bring to the club, and he was very keen to join us.

“He is still relatively young but has good experience from the number of games he has played. Predominately a centre-half, he can also play at right-back, and he will bring additional competition alongside our existing defensive options.”

Webster spent only one season at Ashton Gate, having joined from Ipswich last summer for a reported fee of £3.5million with clauses potentially taking that to £8million.

He has also worked with Brighton’s technical director Dan Ashworth while featuring for England at under-18 and under-19 level earlier in his career.