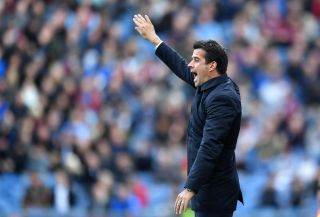 Marco Silva has demanded an improvement in Everton’s away form as they look to get their season back on track.

The Toffees will head to Brighton on Saturday seeking their first league win on the road since March, a record Silva recognises is holding back his side as they sit just two points clear of the relegation zone.

Last week’s 2-0 win over West Ham at Goodison Park lifted some of the considerable pressure off Silva’s shoulders, but he knows his side need to put together a string of results if they are to make rapid progress up a table which remains highly congested – with Everton only four points off sixth.

“What we have been doing away is not good enough,” said Silva. “We have the quality to do more and must do more.

“We have to look at this game (at Brighton) thinking it has to be our first away win, the game we play to score more goals – because we are not scoring enough goals away – and be solid as a team.

“With this desire to score goals and be solid we can win away games in the Premier League.

“We must improve our away form because we have to support the work we are doing and the points we are getting at home with good results and performances away.”

Everton have taken only one point on their travels this season, an opening day draw at Crystal Palace, before suffering setbacks at Aston Villa, Bournemouth and Burnley.

The four games have seen Everton manage only one goal – in the 3-1 loss at Bournemouth – and that is the problem Silva is eager to solve as he looks to take confidence from the display against West Ham.

“We showed quality and pride in ourselves to play at that level and give the answer we did,” added Silva, who is sweating on the fitness of Colombia defender Yerry Mina ahead of the trip.

“We have to build from that, we have to play in that way, always with pride and that pace and desire to win the game.

“And play with the same freedom, we played with so much freedom and confidence.

Brighton sit one place and one point behind Everton in 16th place, and Silva is expecting a tough battle against a side who find themselves in a similar situation.

“We will respect Brighton, they are a quality team, trying to build a clear model in the way they play and build attacks,” he said.

“They are being brave in the way the play at home and away, creating chances and being a tough opponent for everyone.

“It will be a tough game. They need points but so do we.

“We must go there trying to win, thinking it is a must-win game because at Everton all games have to be must-win.

“But they are thinking the same.