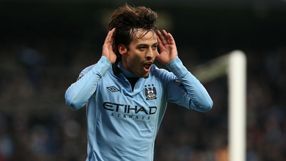 United's advantage at the top was whittled down to four points after Spain midfielder Silva struck in the second and 69th minutes for hosts and champions City.

"All we can do is win our games. We have got 15 left and Man United have got 16 left and I am sure both teams will drop points between now and the end of the season," City assistant manager David Platt told the BBC.

"We have to make sure we keep getting victories so if United do slip up we are in a position to take advantage of that. But we cannot do anything about what United do, we can only look after ourselves."

Liverpool's Jordan Henderson, long seen as a major flop, scored a rare goal in his seventh-placed side's home thrashing of Norwich when his thunderous shot on the turn from the edge of the area flew into the corner of the net after 26 minutes.

The goal was only his fourth since signing from Sunderland in 2011 for 16 million pounds but it was worth the wait for the fans, who also saw an outrageous dummy from new striker Daniel Sturridge set up Luis Suarez for the second.

Sturridge then made it three goals in three games since joining from Chelsea when he converted a cross from another Liverpool misfit Stewart Downing in the second half.

Captain Steven Gerrard added a fourth from distance and Ryan Bennett's own goal made it five as Brendan Rodgers' side showed real signs of promise after a fitful season so far.

There was also a landmark early strike for Queens Park Rangers debutant Loic Remy, who coolly netted in a 1-1 draw at London rivals West Ham United which left Harry Redknapp's side four points adrift at the bottom.

Former Chelsea and Liverpool winger Joe Cole grabbed the 68th-minute equaliser on the rebound for his first goal since rejoining the mid-table Hammers after 10 years away.

Reading boosted their hopes of survival with a second comeback in a week as substitute Adam Le Fondre's brace in a 2-1 win left relegation-threatened Newcastle United again reeling after Yohan Cabaye's free-kick gave the hosts the lead.

"What I've learnt in this division is you have to stay in games and we've done that at 1-0," said Reading boss Brian McDermott.

Newcastle finished fifth last term but are two points above third-bottom Reading and a point ahead of fourth-bottom Aston Villa, who looked on course for only a fifth league win until derby rivals West Bromwich Albion fought back to draw 2-2.

Visitors Villa, like Newcastle another big club facing the abyss, had gone ahead through forwards Christian Benteke and Gabriel Agbonlahor but Chris Brunt and Peter Odemwingie, with a superb hooked finish after 83 minutes, earned them a point.

"We should have been four up," said disappointed Aston Villa manager Paul Lambert. "Some of the football we played was excellent. We gave that game a right good go, but we should have been out of sight in the first half."