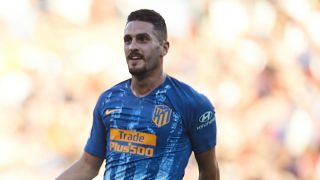 Atletico were up against it after Wissam Ben Yedder deservedly put the hosts ahead at the Ramon Sanchez Pizjuan.

But Simeone deployed Koke in a new role and saw Antoine Griezmann level matters with a stunning free-kick, leaving the Atletico coach to laud his midfield general.

"You could see that they were hurting us down their right flank," said Simeone, with Jesus Navas and Joris Gnagnon having proven a handful.

"We changed Koke's position because tactically he's extraordinary. He did a great job in a position he's not used to. After that, everything changed."

It was an entertaining clash in Seville which saw second-placed Atletico maintain a two-point advantage over their hosts.

However, they failed to apply maximum pressure on leaders Barcelona, but Simeone was nonetheless pleased with the display.

"It was a great game," he said. "Sevilla are very strong at home and there were periods in which both teams dominated.

"We didn't attack very well in the first half but we improved greatly after the break. I think the way in which we reacted deserves praise."