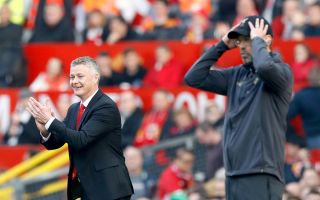 Ole Gunnar Solskjaer has dismissed Jurgen Klopp’s criticism of Manchester United’s playing style and predicted his young side will rise to the challenge of frustrating the Premier League leaders once more on Sunday.

Klopp accused United of negative tactics after the 1-1 draw at Old Trafford in October and Solskjaer said he would take his rival’s evident displeasure as a positive sign.

Solskjaer said: “I take it as a compliment that we defended so well and they’ve not really created chances against us.

💬 “It's a great challenge for our players, again, to play against the leaders of the league. We've just got to prepare as well as we can.”#MUFC#LIVMUNpic.twitter.com/ilhaGLXIKS— Manchester United (@ManUtd) January 17, 2020

“When the opposition manager is frustrated, that is a good sign for you that our boys have done well.

“We’ve played them at Old Trafford twice and been closest to winning both games. So we’ve got some games to look back on that will give us some belief.”

Solskjaer will give Marcus Rashford the maximum possible opportunity to recover from the back injury he aggravated against Wolves in midweek, but the striker is unlikely to feature.

Never want to feel like I’ve let my teammates, the club and most importantly the fans down so did my very best to carry on tonight and was gutted to come off.— Marcus Rashford (@MarcusRashford) January 15, 2020

And the Norwegian insisted his young squad would be up for the challenge of becoming the first team to beat Klopp’s men in the league this season, amid renewed fears of safety issues surrounding the fixture.

Solskjaer added: “(I have) no safety fears. Of course they want to try to intimidate us as long as it’s within the boundaries.

“I’ve been sat on a coach going to Anfield and whatever they shout and scream at you, you don’t really notice.

“You’ve got to look forward to these games. It’s a great challenge for our players to play against the league leaders. It can be an intimidating place but I’m sure it will be fine.”

Solskjaer confirmed he has handed Harry Maguire the United captaincy on a permanent basis as Ashley Young edges closer to a move to Inter Milan, pending a medical on Friday.

Maguire has been handed the armband just six months after his £80million move from Leicester and Solskjaer said: “Everything about him tells me that he is a leader.”

Solskjaer went on to pay tribute to Young, and he admitted the 34-year-old’s move to San Siro marked an unmissable opportunity at this stage of his career.

He added: “Ashley is 35 in the summer and if he gets a two-year contract somewhere I think it’s up to him to take [something] that we weren’t ready to offer.

“He’s been a good servant to the club, he’s been captain and won leagues and trophies but we’ve got other players coming through and Ashley’s mindset was, ‘I want to try something new’.”

Luke Shaw is a doubt after missing the Wolves game with a hamstring injury and Eric Bailly is unlikely to be risked, while Paul Pogba, Marcos Rojo and Scott McTominay are all still out.