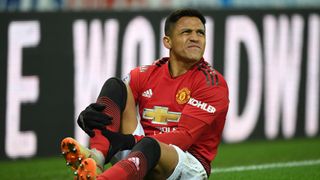 Ole Gunnar Solskjaer believes Alexis Sanchez pushed himself too hard on his return to the Manchester United starting line-up.

Sanchez missed all of United's matches in December due to a hamstring injury but appeared from the bench during the 2-0 victory at Newcastle United on January 2.

The Chile forward started the win over Reading in the third round of the FA Cup by the same scoreline three days later, only to make way after 64 minutes and be sidelined for last weekend's trip to Tottenham.

Solskjaer confirmed Sanchez has trained all week with his United team-mates ahead of Brighton and Hove Albion's visit to Old Trafford but suggested the 30-year-old former Arsenal star might have to adopt a more patient approach.

"He loves to play football. He's been hindered by injury – I know all about injuries and how frustrating that can be and how eager you are to get back," the caretaker manager told a news conference.

"In the Reading game, maybe he should have told me at half-time, 'I need to come off now'. The 15 or 20 minutes he played in the second half, maybe that was a bit too much for him and that gave him a setback.

"He's chomping at the bit, he's working hard in training. His attitude in training has been fantastic and he wants to play.

"I'm looking forward to seeing him and I've got loads of good players to choose from."

One man to have found himself down the selectorial pecking order is Scotland international Scott McTominay.

The 22-year-old also made his only start under Solskjaer in the cup tie against Reading and was picked in a Premier League squad for the first time in his tenure at Spurs – coming on at the death as United saw out a 1-0 triumph.

Celtic have been linked to a loan move for the midfielder but Solskjaer, who will be without Marouane Fellaini for up to a month due to a calf injury, did not sound keen on the idea of any January departures.

"Scott is working hard, he's a young boy that I believe in. We're working on his contract," he added.

"With the injury to Felli as well and the squad we have, I'm not too sure that we're going to see any movement at all."