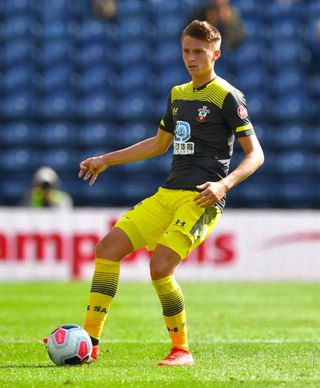 The 20-year-old impressed on his top-flight bow as Saints swept past struggling Aston Villa 2-0 at St Mary’s last weekend.

And now Saints boss Hasenhuttl has backed the Basingstoke-born midfielder to go from strength to strength, given the shot in the arm of that Premier League breakthrough.

“He’s not the guy who makes the most noise, but you can see in the sessions this selection helped him to get more self-confidence, even more,” said Hasenhuttl.

“He’s a good listener and he’s open-minded. It’s a good signal to everyone else to show that we are looking at them, and when the moment comes they will get the chance to play.

“The whole package is strong, with a lot of potential in my view.

“He has a lot of things that really help a team, being good on the ball, covering a lot of distance, but also to work against the ball and win balls, this is very important.

“And what I also like is his mindset because he learns very quick. He’s smart and it’s a very good combination.

“He’s one of the guys. At the beginning of the season he was out for a while with a calf injury, but I knew he would make his first appearance this season.”

Saints make the trip to London to take on West Ham on Saturday, where victory would take them past Hasenhuttl’s target of 36 points that would let the Austrian discuss his own and his players’ futures.

Hasenhuttl will take Saints on the road demanding an upturn in both performance and results against the Hammers.

Saints have lost all three league meetings with the Londoners on Hasenhuttl’s watch, and the straight-talking St Mary’s chief admits that needs to change.

“At home we had very tight games, and West Ham once we were without any chances,” said Hasenhuttl.

“With two big mistakes we went two down and then it was difficult. So we’re really keen to show a better performance because we have to.

“This opponent so far was not our best. But records are there to be broken, as always.

“And it’s important to go there with all the self-confidence we’ve created in away games and show a different face.”