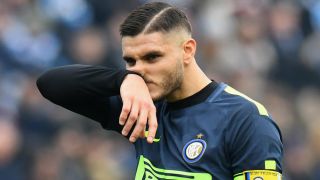 Inter have now gone seven games without a win in Serie A following a 1-1 draw with SPAL on Sunday.

A second-half own goal from Francesco Vicari looked set to give Luciano Spalletti's side all three points until Alberto Paloschi's 90th-minute header snatched a point for the home side.

Inter's last win was a 5-0 thrashing of Chievo on December 3, although consecutive draws against Lazio, Fiorentina and Roma had given the Nerazzurri belief that their form required little drastic improvement.

They laboured for much of the first half at the Stadio Paolo Mazza, though, with an Antonio Candreva strike the closest they came to breaking the deadlock as new signing Rafinha watched on from the bench, from where he was only introduced in stoppage time.

The opener came three minutes into the second half, when Vicari turned in Joao Cancelo's teasing delivery and sapped the growing optimism out of the home fans.

Ivan Perisic almost scored a second and their failure to kill the game proved costly, just as it did at Fiorentina two weeks ago, with Paloschi's fine header denying Inter the win that would have moved them level on points with third-place Lazio ahead of the latter's meeting with AC Milan.

Mirco Antonucci came within inches of turning a Jasmin Kurtic cross goalwards, but Alex Meret was forced into a fine stop to deny Candreva in a lively start in Ferrara.

Alberto Grassi headed a half-chance over the crossbar but there was little else of note in a competitive first half that was low on quality, with Inter bossing most of the possession but creating very little for striker Mauro Icardi.

5 - Mauro Icardi made only five touches in the first half against SPAL, less than any other player in this match. Isolated. January 28, 2018

The Argentine did waste a clear opening just before the break, though, steering a Danilo D'Ambrosio cross over the bar on the volley from barely 10 yards out.

Spalletti made a change at the interval, replacing Candreva with Eder, but Inter's breakthrough came courtesy of a helping hand from the hosts.

Cancelo turned brilliantly into space down the left and sent in a teasing cross, and Vicari, trying to cut out the ball, contrived to prod it into the right-hand corner past the static Meret.

The positivity among the home fans had suddenly disappeared and it nearly got worse for SPAL 58 minutes in, with Meret reacting brilliantly to tip Matias Vecino's shot over the bar after good work from Perisic.

The visitors continued to create chances to kill off the match, with Perisic's stinging strike tipped over the bar by Meret and the resulting corner somehow bouncing over and out of play after a brief scramble.

Samir Handanovic had been given little to do but he was given a fright in the closing stages, with Kurtic blasting over from close range and Paloschi heading over the bar after the Inter keeper had failed to intercept a cross.

That looked to be as close as the 18th-place side would come until the 90th minute, when Paloschi met Antenucci's cross with a diving header that nestled into the right-hand corner.

- Inter have failed to win nine consecutive matches (all competitions) for the first time since March 2012.
- Inter have drawn four Serie A games in a row for the first time since November 2004.
- Alberto Paloschi's equaliser – his fifth strike of the campaign - was SPAL's first headed goal of the season.
- Mirco Antenucci has been directly involved in each of SPAL's last five league goals (three goals, two assists).