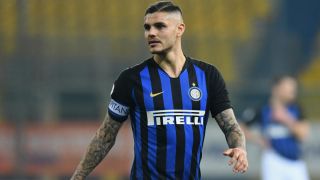 Icardi's contract does not expire until 2021 but the Inter captain has still been linked with Barcelona, Real Madrid and Manchester United.

And Spalletti appeared frustrated with the situation after Inter's 1-0 win over Parma, which extended Icardi's scoreless run in Serie A to seven matches.

"I have not created any problems for Icardi," Spalletti told DAZN following Saturday's clash.

"Issues need to be clarified, because when you leave things half-cocked, they become open to interpretation.

"People have said a few too many things, now there is time to sit down and talk about something we've avoided and dragged along with us for months."

| Thanks for the support when it was needed most.

Icardi has not scored in Serie A since December 15, when he converted a late penalty in the 1-0 victory against Udinese.

The 25-year-old has netted nine goals in the league this season, and 15 in all competitions.