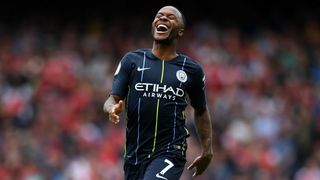 Raheem Sterling believes he has far more improvement in him under Pep Guardiola at Manchester City after signing a bumper new deal with the Premier League champions.

The England winger has reached terms running until the end of the 2022-23 campaign that could reportedly earn him as much as £300,000 per week.

Sterling joined City from Liverpool in 2015 and has proved himself an integral member of Guardiola's free-scoring side.

Season-on-season at the Etihad Stadium he has been involved in a greater number of goals and, with seven strikes and as many assists to his name this term, the 23-year-old feels the sky is the limit.

"There's definitely a lot more to come," he told City TV. "There's stuff that I'm still working on. There's never a time when I think 'this is where it stops'.

"I always want to get better and, ultimately, get my numbers up. I want to score more goals, get more assists and help the team as much as possible.

"But not try to be selfish or anything like that. I'm a person who tries to do my best for the team but if I'm producing and other players are producing that's only going to help the team."

Sterling's stunning strike against Shakhtar Donetsk in midweek underlined his continued progression in front of goal, something he attributes to having a calmer head when chances fall his way.

"Sometimes you see the goal and get giddy," he said.

"With time, I started to realise what I was doing in front of goal and stopped rushing it.

"Just be more ruthless and don't think too much about it – do what you do each day with the coaches on the training pitch."

Along with Guardiola's influence, shooting drills with assistant coach Mikel Arteta on the training field have also had an impact.

"Mikel does individual bits with me and all the attackers, and if the coaches see something they'll come to you and speak about it," Sterling added, with Sunday's derby showdown at home to Manchester United next on the agenda.

"At the end of the day they can only do so much and when you get on the pitch you have to replicate what you've been doing with these guys. Mikel has been tremendous."