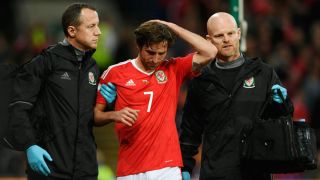 Stoke City are hopeful Joe Allen will be fit to face Manchester City on Saturday, despite the midfielder suffering a head injury while playing for Wales.

Allen was forced off during the first half of his country's' 1-0 loss to the Republic of Ireland on Monday. After initially attempting to play on after the collision with David Meyler, he was replaced by Jonny Williams in the 37th minute.

While the player will now have to follow a specific protocol for head injuries, Stoke's assistant manager Mark Bowen believes the 27-year-old could still be cleared in time to feature at the Etihad Stadium.

"Joe is an early doubt, but we are still hopeful on him for the weekend although he did have to come off last night after suffering a bang to his head," Bowen told the club's official website.

"We haven't seen him today because he only arrived back home late last night, and we wanted to give him the next 48 hours to make sure he is ready to come in on Thursday.

"We didn't see any real need to get him in this morning, so fingers crossed he is OK and available for the game on Saturday.

"There is protocol to follow with injuries of this nature, which we will of course follow - the doctor will go around later today to see him, but he will come back in on Thursday and we will assess him then."

Manager Mark Hughes will definitely be without Ryan Shawcross at the weekend. The defender remains out of action with a troublesome back problem.

There was better news over fellow centre-back Bruno Martins Indi though, with Bowen revealing the Dutchman is making good progress in his recovery from a groin injury.

"Bruno hasn't joined the main group yet, but you see him running round the pitch doing the physical work," Bowen told the Sentinel.

"I hope towards the end of the week he's looking to get involved, he said as much to me this morning, but obviously time will tell."