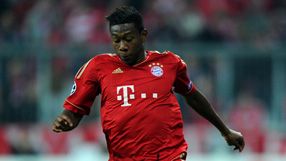 The Austrian has come on in leaps and bounds this season, winning a regular place at left-back, and was unfazed by facing Angel di Maria in the first half and Cristiano Ronaldo in the second after the two Real players switched sides.

"It's great that he can perform like this as such a young player," Heynckes told reporters after Bayern's 2-1 win in the Champions League semi-final first leg.

"He has developed greatly as a player this season and he can achieve more. He is very ambitious, he is very self critical and he lives for football, this is a great bonus."

His emergence is also a boon for Austrian football, which has been in the doldrums for the last few years.

Alaba, born in Vienna to a Nigerian father and Filipino mother, came through the ranks at Austria Vienna but never played for the club, although he sat on the substitutes bench at a league game as a 15-year-old.

He joined Bayern Munich in 2008 and made his debut early in 2010 before being loaned to Hoffenheim.

Heynckes, who took over for a third stint this season, took a special interest in his development but decided he would be more suited to a fullback role rather than his original midfield slot.

Alaba, who in 2009 became the youngest player to appear for Austria, quickly developed an understanding with Ribery on the left flank and the Frenchman had rediscovered his form after a frustrating start to the year.

Alaba has the confidence to play his way out of tight situations in defence and can shoot from distance. His weakness remains his right foot.

His presence has also allowed captain Philipp Lahm to return to the right back position where he is clearly more comfortable, replacing Rafinha, who has been shunted into the reserves.

It was Lahm's run down the right which provided the cross for Gomez's winner.

Bayern's win on Tuesday gave them a chance of saving their season after their Bundesliga challenge fizzled out in the previous seven days following a 1-0 defeat at leaders Borussia Dortmund and a 0-0 draw at home to Mainz 05.

Having conceded an away goal, however, they still face a huge challenge at the Bernabeu on April 25 if they are to keep alive their dream of playing in the final at their own stadium.

"I still haven't decided on my strategy for the return match," said Heynckes. "But we will stay true to our style and play offensively. I'm not a coach who thinks defensively."

Ribery told UEFA.com: "I think it was very important for our confidence to win the home game against Madrid.

"It was a lot of fun, especially with the crowd behind us, but we're only halfway there. The game in Madrid is going to be very, very tough.

"I don't think their goal will change much with regard to our tactics in the second leg. We'll stay compact ... Madrid will need to attack us and that should give us the opportunity to counter."