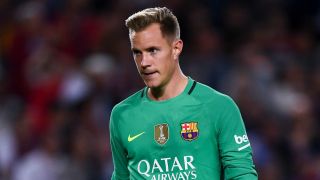 Barcelona have reached an agreement with Marc-Andre Ter Stegen over a new contract until June 2022.

The 25-year-old's previous deal was due to expire in 2019, but he is now set to sign a three-year extension on Tuesday.

Ter Stegen joined Barcelona from Borussia Monchengladbach in 2014 and initially had to settle for a role as deputy to Claudio Bravo, although he was the Catalans’ number one in the Champions League and Copa del Rey.

He became Luis Enrique's first-choice goalkeeper this season following the departure of Bravo to Manchester City and has now earned himself a new deal.

He has made 93 appearances for Barcelona since his arrival at the club, winning two LaLiga titles, lifting the Copa del Rey on three occasions, while also enjoying Champions League, Club World Cup, Supercopa de Espana and UEFA  Super Cup glory with the Catalans.

The former Gladbach star is part of Germany’s squad for the upcoming Confederations Cup in Germany.