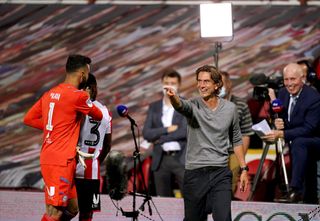 Thomas Frank says it was the “dream from day one” to secure promotion to the Premier League, with just one game separating Brentford from reaching the top flight for the first time in over 70 years.

The Bees go into Tuesday’s Sky Bet Championship play-off final against Fulham as narrow favourites, having missed out on automatic promotion by just two points.

Looking to end an absence from the top table of English football that stretches back to 1947, Frank has guided Brentford to their first Championship play-off final and to within touching distance of the riches of the Premier League.

A Wembley win on Tuesday could earn the club around £160million in additional revenue over the next three years according to sports financial analysts Deloitte. It is a mouthwatering prospect, but Frank is staying focused on the game itself.

“I think we’re in the play-off final, the best result or performance in the last 73 years in Brentford’s history,” said Frank, who joined the Bees in 2016 as assistant boss before taking over as head coach two years later.

“A lot of people have many, many years, and I’ve been on this journey for the last three-and-a-half years. Brentford Football Club can now compete with the biggest clubs in the country, not in the Premier League, but some big, big clubs in the Championship and we were one or two points away from direct promotion.

“We came third, we overcame setbacks and we are now in the final against a much bigger club and we have a strong belief that it’s going to be an even game.

“We know that if we perform we’ve got a really good chance against another good side who create a lot.”

“I’m so proud of being part of this and what we’ve created and we need to remember that.”

Brentford have already beaten west London rivals Fulham twice this season, 1-0 at Griffin Park in December and 2-0 at Craven Cottage in their first match back after the season had resumed in June.

The Bees have also topped the Championship scoring charts this season with a prolific front three of Said Benrahma, Bryan Mbeumo and Ollie Watkins, while goalkeeper David Raya was joint winner of the Golden Glove award for the most clean sheets in the division.

It has been another impressive campaign from a club that was playing in League Two barely a decade ago, and Frank believes the future looks promising for the Bees regardless of Tuesday’s result.

He said: “This strategy and the model, the Brentford model, one of the dreams from day one was to go into the Premier League and that’s why I think we’re in such a good place, no matter what happens tomorrow is that we have a strong foundation.

“But the dream has been Premier League from day one and we need to say take it one step at a time and don’t try to overachieve, but you know build it gradually.”

Brentford’s astute recruitment has been a large reason for the club’s success and ability to compete with the Championship’s big guns, and Frank says the key for him is bringing in players with the right character as well as ability.

A year ago today we began this journey, tomorrow it all comes to a conclusion 👊👊#MondayMotivatonpic.twitter.com/3L7MzWYrZH— Brentford FC (@BrentfordFC) August 3, 2020

“I think the ‘hidden gem’ or the ‘big secret’ is the human touch,” the 46-year-old said when asked about the data and science behind player recruitment, which has been likened to a ‘Moneyball’ approach.

“But one of the reasons we recruit very well is the people that we want in are good characters. It’s so big for me, it’s the first thing.