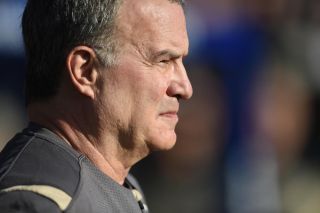 Leeds boss Marcelo Bielsa denied that nerves are affecting his team after they suffered a 1-0 defeat at QPR.

It was Leeds’ second successive Sky Bet Championship loss and continued an alarming run which has seen them win just one of their past seven games.

The second-placed visitors ended the game with 10 men after Kalvin Phillips was shown a red card in the 88th minute for a challenge on Geoff Cameron – who missed three months of last season because of a tackle from the same player.

The result will increase fears among Leeds fans of a repeat of the poor run last term which cost the club promotion.

However, Bielsa insisted that anxiety has not been a factor in recent performances.

“I don’t think that, but it’s clear that we have not taken advantage of our chances,” he said. “We have to have a lot of chances to score one goal.”

Bamford was the biggest culprit. Prior to the penalty he missed a glorious chance when he fired over after finding himself through on goal with just Kelly to beat.

“The team played according to our style. We played in the opposite half and had a lot more chances than our opponents.

“Of course there are things we wish were different, like our set pieces and our crosses.

“In matches like this, where it’s difficult to score, you have to have the answers.

“The supporters will recognise the good moments of the team but they will do a good evaluation. Never try to change the opinion of the fans.”

Leeds had every reason to feel aggrieved about Wells’ goal. The striker clearly handled the ball before netting from close range.

Bielsa said: “In football you have lots of situations you can manage and some you can’t manage.

“Sometimes the ones you can’t manage damage one team or are in favour of one team. Today, everything that we couldn’t manage in the game was against us.”

QPR manager Mark Warburton felt his players deserved credit despite the fortuitous nature of the goal.

“We were good in the first half and I thought we deserved the lead at half-time,” he said.

“We could have had a couple more scruffy goals in the first half, so I thought we deserved the half-time lead.

“We got too deep in the second half and invited them onto us. They’re a very good team and we rode our luck a bit.

“But so much credit to the players and the way they stood up, to a man. Leeds are a highly talented team.

“So much pleasure was taken by the players from today’s performance because that type of game, defensively, you do have to stand up.

“You have to throw your body in front of the ball and show old-fashioned defending. Sometimes you do have to win ugly.

“Today you saw a QPR team that have won nice games but this time won in ugly fashion. That’s heartening for all of us.”