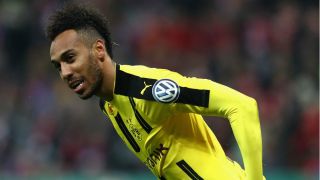 Thomas Tuchel is not concerned about the looming fight to keep hold of Pierre-Emerick Aubameyang as Borussia Dortmund prepare for a dramatic conclusion to the Bundesliga season.

Aubameyang has scored 27 goals in the league alone this campaign to cement his status as one of Europe's brightest attacking talents.

The Gabon international has publicly declared his desire to play for Real Madrid, while Ligue 1 heavyweights Paris Saint-Germain have also been linked with the 27-year-old, who is under contract until 2020.

Addressing the media ahead of Saturday's crunch clash with fellow top-three hopefuls Hoffenheim, Tuchel claimed to be unperturbed over the future of the club's prized asset.

"I am totally relaxed," he said.

"As far as I know, [Edinson] Cavani recently extended [his contract] with Paris. The demand on [acquiring a new striker] is therefore not so great. We still have three important weeks, so now is not the time to comment on rumours. We can do it in peace after the season."

Another of Dortmund's brightest talents, forward Marco Reus, has struggled badly with injury this term, suffering from Osteitis pubis and then a muscle tear.

His battle to regain form and fitness prompted Tuchel to state publicly that he hopes Germany coach Joachim Low will not select Reus for the Confederations Cup in Russia, which begins in June.

"He does not have to participate in the Confed Cup," said Tuchel.

"With his history of injuries, I could well find reasons to say that he takes his time to get fresh and ready.

"If Marco is invited and decides to go, we will support him. But we will not be distraught if he stays here."

Dortmund go into this weekend's match at Signal Iduna Park fourth in the table, one point behind Hoffenheim and seeking to overhaul Julian Nagelsmann's side in the hotly contested race for automatic Champions League qualification.

"We have our own pressure, our own ambitious goals, which is nothing special before this game, the pressure is always higher in Dortmund than at Hoffenheim," added Tuchel.

"This is not a disadvantage for us and we are proving the whole season that we can deal with it."

Tuchel has Sokratis Papastathopoulos and Marcel Schmelzer available, but Erik Durm (back) is out.

He added: "Andre Schurrle and Marc Bartra are [back] running [in training]. Sebastian Rode returns to the squad. We are very happy about this, he is training at a very high level."