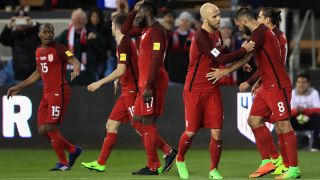 Clint Dempsey and Christian Pulisic helped the United States get their World Cup qualifying campaign back on track with a 6-0 thrashing of Honduras.

Dempsey scored a hat-trick at Avaya Stadium in San Jose, California on Friday, while Pulisic ran the show.

The Borussia Dortmund teenager set up two of Dempsey's goals and scored one himself as USA clinched their first points in the fifth round of CONCACAF qualifying, after defeats to Mexico and Costa Rica.

Sebastian Lletget and Michael Bradley had scored earlier for Bruce Arena's men, who climb into fourth with their much-needed win.

It was mostly thanks to Dempsey and Pulisic, the latter allowed too much space as he took complete control of the contest.

We on an ultralight beamDEUCE WITH THE HAT TRICK! March 25, 2017

However, USA's win was marred by injuries to John Brooks and Lletget, who opened the scoring after just five minutes.

Pulisic was played through on the left side of the area but had his shot well saved by Donis Escober, only for Lletget to be on hand to tap in the rebound for his first international goal.

Lletget would make way due to an ankle injury shortly after, but captain Bradley doubled the lead in the 27th minute.

After taking a pass from Alejandro Bedoya, Bradley dribbled across the field from the right wing before firing a 25-yard effort left-footed into the bottom corner.

A rampant USA would only have to wait another five minutes to score again.

Pulisic's delightful chipped pass found Dempsey, who held off a defender before rifling into the top corner.

If the first half was good for USA, the second only got better with three goals in the first 10 minutes.

Straight from kick-off, USA made it 4-0 as Jozy Altidore clipped a pass through to Pulisic, who side-footed home an easy finish.

The kid is special. A cool, calm and collected finish for just moments into the second half. March 25, 2017

A well-weighted pass from Pulisic into the path of Dempsey helped the forward double his personal tally by rounding the goalkeeper in the 49th minute.

And Dempsey completed his hat-trick in spectacular fashion as the rout continued.

The Seattle Sounders star whipped a 25-yard free-kick past Escober, his 55th international goal, as USA continued their domination.

Honduras continued to fight, but USA cruised to a confidence-boosting victory ahead of facing Panama on Tuesday.