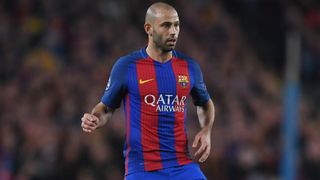 Barcelona coach Ernesto Valverde offered no guarantees over Javier Mascherano's future, but said the veteran was committed to the LaLiga giants.

Mascherano, 33, has been linked with a move to China in January, having made just six LaLiga appearances for Barca this season.

Valverde praised the Argentina international for his commitment, but said his future would be discussed.

"The winter transfer market [January] hasn't arrived yet, we wait for that to begin. And that's one of the questions we have to look at but for the time being he's still ours and whenever he has played, he has played well," he said on Saturday.

"He's committed to the club, on and off field, and as long as he's here we don't need to think about anything else

"On field, he brings a lot, as well as in the locker room. He's a veteran and everyone respects him, just the way he is.

"There are players who are role models in the dressing room for one reason or another and he's one of those guys."

Mascherano made the move to Barca from Liverpool in 2010 and has gone on to win four LaLiga titles and two Champions League crowns among numerous other trophies.

Valverde, whose side are top of LaLiga, was unwilling to say too much about his team's plans for January.

"These are internal questions, just like we don't talk about potential new players, I don't talk about this situation either. What's clear is that Barca, like everyone else, wants to reinforce itself if it can," he said.

"These are things that can happen, everyone can see and have their opinion, but these are questions we deal with internally and we will see what happens.

"We're always looking at the transfer market, I know everyone likes to toss names out but we have certain players here and we know that for us those are the best players."