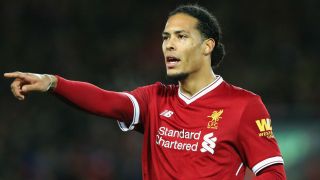 Virgil van Dijk is already feeling at home with Liverpool after helping the club to the Champions League final following his January switch from Southampton.

The Dutch defender was a long-term target for Jurgen Klopp as he looked to shore up his back line and eventually made the move to Merseyside for a reported £75million.

Van Dijk has become a key member of the squad that has overdelivered in Europe this season and outlined his commitment to the club during a pre-match news conference ahead of Saturday's clash with Real Madrid in Kiev.

Asked how much the club had impacted on him, Van Dijk said: "A lot, obviously.

"I think from day one, the lads and the manager and the staff and everyone around the club and the people who work at Liverpool have made me so welcome and that helps a lot with settling.

"Obviously the results help as well. But I think Liverpool is my team and Anfield is my home. I love playing for this club and we’re in the Champions League final and we want to do it.

"I think Liverpool as a club deserves to be in the Champions League year in, year out and hopefully that’s going to happen.

"But to be in the Champions League final now, hopefully we’re going to do it."