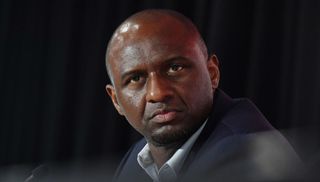 Balotelli has scored 43 goals in 66 appearances for the Ligue 1 side, rebuilding his reputation after a wayward few years in England and his home country.

Indeed, the 27-year-old has been recalled into the Azzurri setup on the back of his good form and is expected to move to Marseille in the coming days.

Vieira however, had harsh words for the striker, telling the Nice-Matin: ''I got him on the phone a few weeks ago and it was arranged for him to recover [here].I Unfortunately, he isn't here.

''It's a shame because he spent two years, he has built a very good relationship with the club and the supporters. It's unfortunate it ends as well.

''Him wanting to leave is not a problem, it's part of football today. Team-mates such as Seri and Le Marchand, who knew that they changed their club, were present. It was not easy for them, but they worked within the club. For Mario, it ends differently."