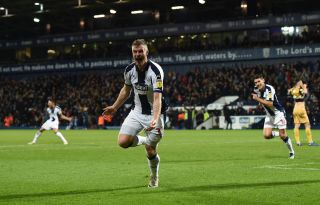 Albion travel to Villa Park for the first leg of their Sky Bet Championship play-off semi-final on Saturday.

Villa set a club record of 10 straight wins in their final 12 games, only losing to champions Norwich on the final day.

They are second favourites to win the play-offs behind Leeds despite coming fifth, four points adrift of the Baggies, and Brunt is not prepared to roll over.

He said: “It’s not their God-given right to get to Wembley. They were there last year (losing 1-0 to Fulham) but it doesn’t mean they’re going to get there again. It’s down to us to make sure they don’t.

“Their form going into the play-offs has been great, you can’t get away from that.

“I don’t think for any one moment they think they’re already in the final because they’re going to have two tough games against us.”

Albion won 2-0 at Villa Park in February after drawing 2-2 at The Hawthorns two months earlier.

And ahead of the derby Brunt will keep a low profile when he takes his kids to school.

“I live in Sutton Coldfield, there’s a lot of Villa fans there, I’ll be keeping my head down this week,” said the Northern Ireland international.

“I know people on the school run who are big Villa fans, you don’t see many West Brom fans in that area.

“At the end of the day you’ve got to do better than somebody over two games. Every one of those teams can take points off the other.

“It’s a strange scenario, you’d definitely rather be one of the two already promoted.

“Fair play to Norwich and Sheffield United, they were the two best teams and they deserve to be promoted. Hopefully we can be best of the rest.”