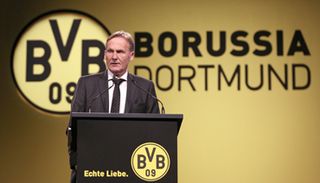 Watzke admitted he had been irritated by the recent behaviour of Germany's biggest club who last week signed Dortmund's Mario Gotze.

"I have always spoken about Bayern with great respect and admiration. But I must say now that things have cooled off a little," Watzke told reporters. "There have been a couple of irritations recently."

Dortmund host Bayern on Saturday in a Bundesliga game which is effectively a friendly, with Bayern having already won the title and Dortmund assured of a Champions League place next season.

The two arch rivals meet again in the Champions League final in London on May 25.

Watzke said there was still a working relationship between the clubs and added: "Everything should go off in a fair, sporting manner on Saturday but there will not be hugs all around like before.

"Why should we act as if everything is hunky-dory?" added Watzke, who has been responsible for Dortmund's financial renaissance after the club appeared on the brink of collapse in 2005.

"There won't be any lunch with Bayern, just a handshake," he said.

Dortmund have won the Bundesliga in the last two seasons and also beat Bayern in last year's Cup final.

Bayern have turned things around this season, knocking Dortmund out of the Cup and taking back the league.

Last week, Dortmund announced that Gotze, one of their top players and a product of their youth academy, would be joining Bayern next season.

Dortmund said pointedly that Bayern had never been in contact with them over the move.

Previously, the two coaches had become entangled in a war of words in March.

Dortmund's Jurgen Klopp said Bayern were spending their way to success and were imitating other teams "a bit like what the Chinese do in industry."

He later apologised but not before his opposite number Jupp Heynckes accused him of lacking dignity.