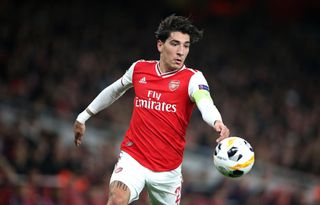 Hector Bellerin has called for unity at Arsenal after captain Granit Xhaka swore at supporters during Sunday’s Premier League draw with Crystal Palace.

The 27-year-old was jeered as he was substituted off in the 2-2 draw and responded by waving his arms, cupping his ears and mouthing “f**k off” before refusing to shake manager Unai Emery’s hand and taking off his shirt as he headed straight down the tunnel.

The decision to appoint Xhaka as captain, albeit based on a blind ballot by the squad, has drawn criticism with the Switzerland international a divisive figure among the fanbase.

Emery said after the game that his actions were “wrong” and said he would talk to Xhaka before deciding whether or not to strip him of the armband.

Bellerin, Arsenal’s third captain behind Xhaka and Pierre-Emerick Aubameyang, did not play in the game as he continues to regain full fitness following a serious knee injury.

But the Spanish full-back took to Twitter on Monday morning to ask for everyone involved with the club to pull in the right direction.

“We are all humans, we all have emotions, and sometimes it’s not easy dealing with them. It’s time to lift each other up, not to push each other away. We only win when we are together,” he wrote.

We are all humans, we all have emotions, and sometimes it's not easy dealing with them. It's time to lift each other up, not to push each other away. We only win when we are together. #COYGpic.twitter.com/dkDI7M3xew— Héctor Bellerín (@HectorBellerin) October 28, 2019

Ian Wright, who scored 185 goals during his time with the club, fumed at Xhaka’s behaviour.

“He’s got the responsibility of being able to take that on board because he’s been voted in. You can’t go like that.

“The amount of stick someone like Mesut Ozil has got I could understand if (he) throws his shirt down.

“He’s the captain, the manager has got faith in him. He should be apologising, he should have apologised already.

“That’s the guy they’ve chosen as captain and that’s not captain’s behaviour. Arsenal fans have shown a lot of patience with him and the performances he has put in. He owes them a lot more than that.”

On a combustible afternoon in north London, Emery also took more flak as his side gave up a two-goal lead to be held to a draw.

Arsenal were two goals ahead inside the opening 10 minutes as defenders Sokratis Papastathopoulos and David Luiz struck just 106 seconds apart.

But Palace fought back for a share of the spoils as Luka Milivojevic converted a VAR-awarded penalty before Jordan Ayew’s second-half header saw the Eagles draw level.

Sokratis thought he had won it for the hosts late on, only for his effort to be chalked off by VAR after a foul in the build-up.

The result means Arsenal have won just two of their last eight Premier League games, with Emery’s side sitting fifth in the table.